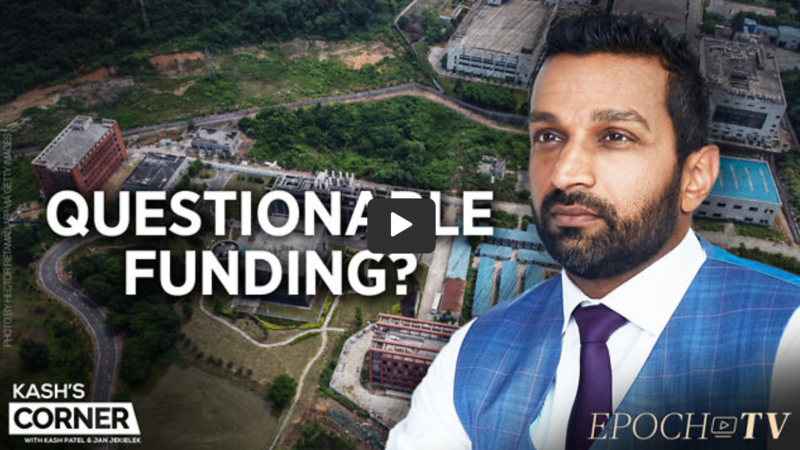 Jan Jekielek: Well, Kash, why don’t we start off with a new article this time by Hans Mankey and Jeff Carlson. And this is quite incredible. I’m just going to read the full headline, but it speaks to something that you and I have been talking about quite a bit in the past. Here’s the headline, “Scientists Who WERE Instrumental to COVID-19 ‘Natural Origins’ Narrative Received Over $50 Million in NIAID Funding in 2020 to 2021.”

So, basically these guys jumped in, they looked at basically the funding, the details of the funding that had been put out during these years. And they found that these, a number of very, very prominent scientists, three of them were actually involved in this proximal origins paper that basically set the narrative that you can’t, that basically that the lab origin or possible lab leak, that’s all a conspiracy theory. They were actually, these people were involved right in this paper. And a number of them got a lot of, appeared to have gotten a lot of, kind of a boost in funding.

Mr. Patel: I don’t even know where to start because this it’s such a problematic issue in government. And I’m glad that, Epoch Times is doing a great job covering this issue. It’s critically important to government oversight. And we’ll talk about that in a second about holding people accountable internally in government. But as a guy who was in all three branches of government, at one point in his career, we sign onto these agreements when we sign up to serve that you can’t do anything for yourself, pecuniary, monetary gain. You can’t sort of go on the side and have alternate revenues or get funding for your programs through the process.

That’s just not outlined like it is for the NIH stuff. And that’s what most people don’t dive into, because I don’t think before COVID, Jan, how many people even knew what NIH was? I had heard of it and I knew they were doing lots of things in the medical field, but we just never pressed on these matters. And I thought it was something, these conflict free funding streams were, I thought, supposed to be everywhere in government, but it seems that’s not the case. And I’m glad you brought up this article and there’s a whole host of parameters I’d like to get into on this stuff.