Kash Patel to Newsmax: Filings Show Clinton Camp 'Taking Aim at Each Other' 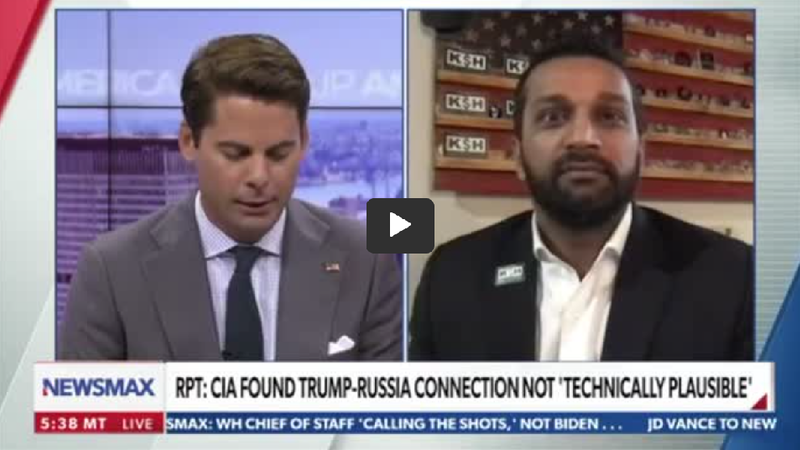 Special counsel John Durham's latest filings in the Russia origins probe, which allege that Hillary Clinton, her 2016 campaign, its attorney, and an unnamed big tech executive worked to smear former President Donald Trump before the 2016 election, show the people around Clinton are attacking each other, former prosecutor and chief of staff for the Department of Defense Kash Patel told Newsmax on Thursday.

"What it shows is the joint venture conspiracy with John Durham has been laying out for almost a year, plus that the cast of characters from Robbie Moog, John Podesta, Marc Elias, Fusion GPS, Rodney Joffe, this tech executive, all of these characters who have been screaming through the fake news media that they were innocent and it was all a setup are now taking aim at each other," Patel said on Newsmax's "Wake Up America."

The filings also reveal that Michael Sussmann, the Clinton campaign attorney currently under indictment by Durham, has been set up to "take the fall," said Patel.

"In his latest pleading, John Durham states, emphatically, that the FBI and CIA in 2016 and 17 decided that the information that Michael Sussmann peddled to the CIA and FBI about the Alfa Bank server was fake, bupkis, bogus information," Patel added.

Clinton had been "riding their coattails on this information for years," Patel said. "Now John Durham comes in and got the agencies themselves to admit it was false."

The continued investigation is also revealing the depth of "how bad this setup was by the Hillary Clinton campaign," said Patel.

"I'm the chief investigator of the Russia investigation for Chairman [Devin] Nunes that unveiled this entire setup against Donald Trump," said Patel. "We didn't know it was going to be this type of takedown. We didn't know a Democratic Party and a presidential opponent, the FBI, the mainstream media, corrupt actors, lawyers, agents, and people on the campaign trail would all come together to form a criminal conspiracy to take out a presidential candidate. [It] just sounds like science fiction."

Meanwhile, Joffe remains a "subject at large" in the ongoing investigation, said Patel, referring to Durham's filings, after being asked if he could name any of the tech executives allegedly involved.

Joffe is a cybersecurity expert referred to in Durham's indictment against Sussmann as "Tech Executive-1," according to CNN. Reportedly, he worked with researchers collecting information about the Trump organization, which Sussmann then turned over to the FBI.

"I believe Rodney Joffe has been identified by multiple pleadings and statements in the media," said Patel. "He is the guy that is now seeking immunity through his own counsel."

However, Patel asked why Joffe would be seeking immunity through his counsel when in a federal prosecution only the government can grant immunity.

"He's doing so because he knows he's got information that's going to bury Sussmann and Clintonworld, and he doesn't want to get charged," said Patel.

This article was originally published on NEWSMAX.com
NL-Apr25_NewsMax by N/A is licensed under N/A N/A