EXCLUSIVE: Kash Patel Talks His Latest Brave Book: 'Plot Against The King 2' and Whether the DOJ Can Survive 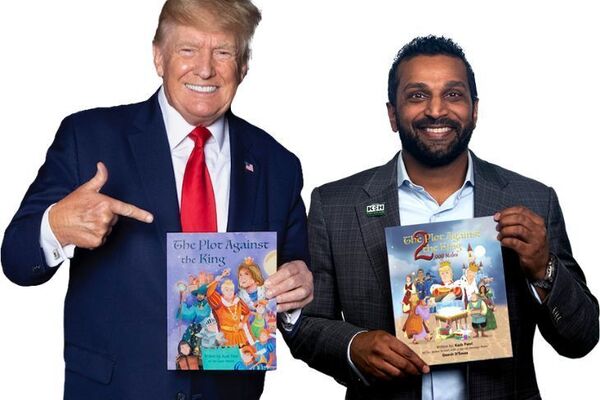 Kash Trump Image by N/A is licensed under RedState N/A
Back in May, RedState covered Brave Books’ The Plot Against the King, featuring Kash Patel, the Former Chief of Staff for the Department of Defense and Deputy Assistant to Donald J. Trump.

But that was only Part 1 of a three-part trilogy. On Tuesday, Part 2: The Plot Against the King 2: 2,000 Mules launched on Tuesday. Part 2 launches off Dinesh D’Souza’s hit film 2,000 Mules, which focused on geo-tracking of mules paid to illegally pick up and drop off mail-in ballots during the 2020 election. Patel takes the Medieval storyline from Part 1 and crafts the facts outlined in 2,000 Mules and the subsequent exploration of voter fraud with an engaging, kid-friendly narrative.

Yeah, our pitch is to focus on the power of, you know, teaching the kids the truth. And if we can relate it to something historical in a fun way, then we do that.

“You know none of our books say you should be a Democrat or liberal or Republican or conservative. They kind of just stress on what is happening, that we will set it in Medieval times, and make it fun and have some characters. We’ll just say, you know, something like doing the right thing or the truthful thing is difficult, and that’s sort of what happened in this time in history, and hopefully the kids attach to the message more than anything else.”

It was a fortunate happenstance that the release did not coincide with Queen Elizabeth II’s funeral on Monday. However, it happened to coincide with the first hearing of Special Master Raymond Dearie, the retired judge appointed by U.S. District Judge Aileen Cannon, regarding the documents taken by the FBI during the Trump-Mar-a-Lago Raid.

According to the Wall Street Journal, Special Masters are appointed after the search of a law office (or in this case, a President’s residence), to ensure attorney-client communications are protected. Judge Dearie holds a more complex role, as outlined by Judge Cannon’s ruling. Dearie is tasked with deciding whether documents are protected by “executive” privilege, a legal doctrine that shields some communications between a president and advisers from public view.

Kash Joins Just The News No Noise to Discuss the Hunter Biden Laptop, Durham and More!

Kash on Hunter Biden Laptop: "They Are Trying his Case in the Court of Public Opinion"